Here I sit, trying to focus on a non-food related blog post, and all I can think about are Christmas cookies.  (Actually, I’ve been thinking about cookies a lot for the past week.)  Instead of visions of sugar plums, I have visions of raspberry thumbprint cookies, molasses cookies, chocolate candy, sugar cookies, and peanut brittle.

Well, I don’t mean literally having visions.  If I were seeing imaginary cookies floating around me that would be weird.  (And you should be concerned.)  Although, I can think of worse things to have visions about.

Allow me to introduce you to the Luna Moth!

(Maybe I should just start this post over again.)

This beautiful moth is one of the largest in North America, and reaches a wingspan of about 4 1/2 inches.  Out of all the moths I’ve seen, it’s definitely my favorite.  I love its bright color, the “eyes” on the wings, and the fluffy little antenna.  It looks so fuzzy I wish I could pet it! 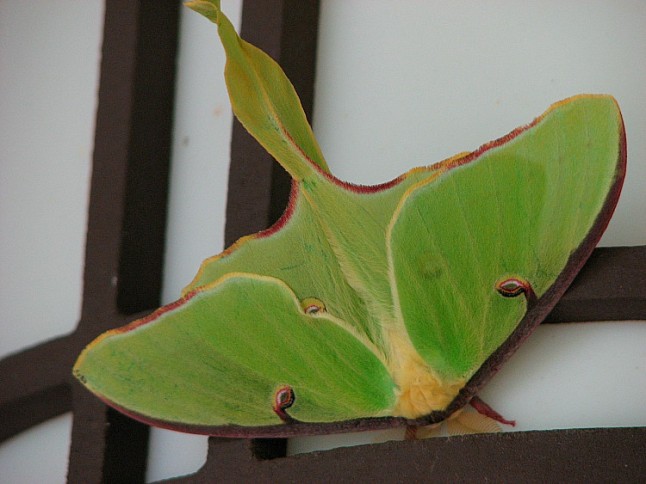 Interesting fact:  the Luna Moth’s long “tails” flutter as it flies, which creates confusion for bats who are looking for a snack.  If you’ve read a little about bats, you know that they are nocturnal hunters and basically use sonar to locate their prey.  The moth’s fluttering tails act a distraction and the bat is more likely to attack the tails, leaving the rest of the moth intact and giving it a chance to escape.

2 thoughts on “Photo of the Week – Luna Moth”