If pictures of spiders really, really bother you, then don’t read this post.

I have a love/hate relationship with spiders.  On one hand I find them to be fascinating and beautiful creatures.  On the other hand, they can be downright creepy.  I stepped out of the shower about a week ago to see a 2-inch spider chilling on the bathroom floor and I let out a startled “Eek!!” before calming down and going in search of something to squish it.  What is it about spiders that causes so much loathing among the majority of humans?  We are significantly bigger than they are.  Even the largest spider in the world (which can get up to 12 inches across by the way) is still a fraction of the size of an average human, so why is it that they frighten people so much?

I can understand the fear of venomous spiders such as Brown Recluses or Black Widow Spiders.  The first apartment I lived in had an infestation of Brown Recluse Spiders.  Those things are creepy; have you ever watched one walk?  They build small, chaotic webs in secluded areas and sometimes just wander around the corners of the room, with slow movements as though they’re walking through water.  I examined my sheets before getting into bed at night, and all shoes and clothing were kept up off the floor and checked before I put them on.  I didn’t walk across the floor barefoot for any reason due to the possibility of stepping on one.  But even with that infestation, the chances of me actually being bitten and then reacting severely to the bite were fairly slim.  The reality is that Brown Recluse Spiders are surrounded by quite a bit of hype.  Their bites can be bad, but are not so in every case.  Also, as per their name, Brown Recluse Spiders really aren’t interested in humans.  They would prefer just to be left alone.  Bites typically happen when someone reaches into a space where said spider is hiding or rolls over onto the spider while sleeping.  Similarly, Black Widows are not aggressive spiders despite their reputation.  They bite more as a defense mechanism than anything else.

That being said, I certainly wouldn’t advise anyone to go about seeking to meet a Brown Recluse or Black Widow Spider, but the point is that you stand a much greater chance of dying in an automobile accident than dying from a spider bite.  So, we’ve arrived back at the original question:  why do spiders frighten us so much when they statistically pose less of a threat than driving down the road to work every day?

Random side note:  Since I moved to Florida, I haven’t seen a single Brown Recluse Spider.  From what I can see on maps, it appears that they don’t really live here.  Arkansas (where I’m from) on the other hand, is basically the capitol of Brown Recluse Spiderdom.  So if you hate those spiders, don’t move to Arkansas.

I genuinely enjoy learning about different insects and spiders.  There are so many different kinds, sizes, shapes, and colors, and there’s a name and classification for each one (well, all the ones we know about anyway).  Imagine the kind of creativity required to design and create every single one of those spiders and insects.  God’s creation is truly amazing, even where spiders are concerned. 😉

So, let’s learn a little bit about this spider, the Golden Silk Orb Weaver, also commonly called the Golden Orb Weaver or Banana Spider.  I found this relatively large spider in my yard a few days ago, and it’s been happily living here ever since.  She’s beautiful and helps keep the mosquito and wasp population down (I hate wasps with a vengeance), so I’m not complaining.  Golden Orb Spiders receive their name from the golden/yellow color of the silk in their webs.  It’s hard to see in my pictures, but in direct sunlight you can see the faint yellow or golden glow, which is kinda cool.

When it comes to determining a spider’s gender, I’m a little bit clueless, but I’m fairly certain that this one is a female due to it’s size.  Golden Orb Weaver female spiders are significantly larger than males, and will sometimes eat the males after mating if the male spider can’t get away fast enough.  (Sorry, that is really weird, but they are spiders after all.)

Golden Orb Weavers are some of the largest spiders in Florida.  This particular spider is about 4 inches from tip to tip including legspan.  In other parts of the world, Golden Orb spiders have been recorded as over five inches long including legspan.

Side note:  Another large spider is Florida called the Huntsman Spider, and it can get up to five inches across.  Confusingly, both Huntsman Spiders and Golden Orb Weavers are referred to casually as Banana Spiders even though they look very different.  There are some spiders in Central and South America that are labeled Banana Spiders as well, which also look nothing like the Golden Orb Weaver.  One example of this is the Brazilian Wandering Spider, which is considered to be one of the most dangerous spiders in the world.

Despite their intimidating size, Golden Orb Weavers are quite harmless.  The spiders’ venom is effective on their prey, but has been shown to have little effect on humans.  Also, the spiders are unlikely to bite unless disturbed or threatened in some way.  Due to the large size of their mouth parts, it is possible that they would break the skin or cause some mild localized swelling and pain, but nothing serious (unless you have a rare specific allergy to Golden Orb Weaver venom or something).

As far as their “dinner” is concerned, Golden Orb Weavers will eat a wide variety of insects, ranging from mosquitoes to large insects like cicadas and katydids.  Some large spiders may even eat small frogs if they become entangled in the web.   The spider in my yard was feeding on a fairly good-sized katydid when I first encountered it earlier this week.  Golden Orb Weavers immobilize their prey by biting/injecting them with venom, and then the prey is wrapped in silk and stored in the web for later consumption. 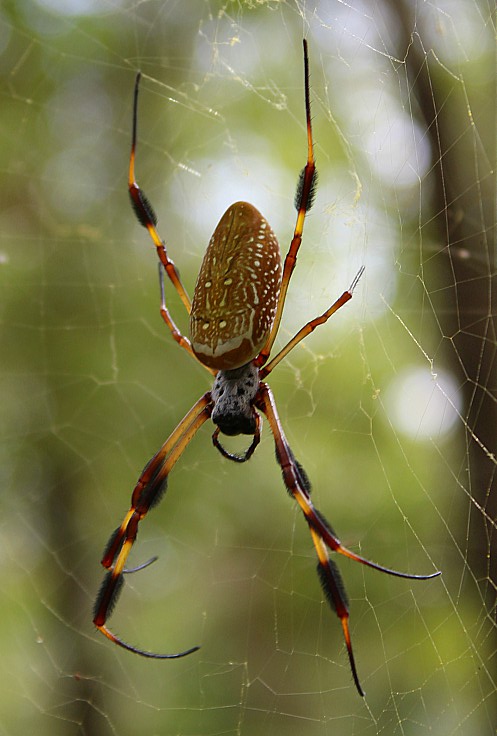 If you hate spiders and decided to read this post anyway, I hope you have a new appreciation for the Golden Silk Orb Weaver.  It’s a fascinating little creature.  Look at those colors!  It has stripes and polka dots.  How cool is that?