Easy and delicious Swedish Pancakes – made with whole wheat flour, oats, and buttermilk.

Yesterday, my mother-in-law and I took a day trip to the beach for a late “post hurricane shark’s teeth hunt”.  We weren’t as successful as we had hoped; we found about six teeth total between us, and I found several shards of glass at various locations on the beach.  (Really, people?  Clean up your glass bottles.  I have no desire to step on that stuff. My feet are hurting just thinking about it.)

The surf was somewhat high yesterday, possibly due to the fact that Tropical Storm Maria is still churning around in the Atlantic and kicking up a few waves for us.  I found it entertaining to watch the surfers while I was searching for sharks’ teeth along the shore.

“Annndddd…  He’s up!  Great job; you got this!”  *surfer performs an epic face plant*

The biggest quandary with any recipe I post on my blog is deciding what to name it.  I wonder about this with those who have been blogging about food for longer than I have.  Do you ever run out of names for the recipes you’re posting, especially when a new recipe is a variation of another previously posted recipe?  “Good morning, everyone, and today we have variation no. 15 of pancake recipe VI!”  I won’t usually publish a variation that simply, for instance, switches out white chocolate chips with dark chocolate chips or something like that, but the fact is that anyone who cooks or bakes a lot will do variations on their recipes at some point, and I’m no different.  When I come up with one that I like, I want to share it!

Yes, you just read an over the top explanation about something relatively simple.  I specialize in that sort of thing.

Today I’m posting three pictures instead of the usual one or two, because this stack of pancakes turned out to be so perfect.

Look at them.  They’re looking into your soul. 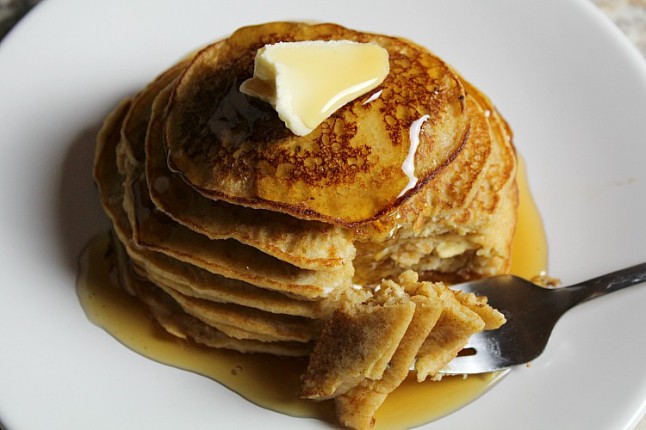 Now I’m feeling sad that I already ate them.

In a medium-sized bowl, stir together flour, oats, Sucanat, and salt.  Add buttermilk, eggs, and olive oil and mix until blended.  Drop by 1/3 cupfuls onto a lightly greased, moderately hot griddle, or lightly greased skillet over medium heat.  Cook until bubbles form on top of pancakes and undersides are golden brown.  Flip and cook until other side is golden brown.