These homemade whole wheat flour tortillas are easy to make and taste so much better than store bought!

Wednesday of this week I spent much of the day working outside in the Florida weather phenomenon known as 96% humidity.  After that long, sweaty day, I got the chance to visit the beach yesterday morning with my mother-in-law.  It was warm and sunny, but the cool water felt great and I found a couple of nice shark’s teeth while walking along the shoreline.  Around noon, a nice little thunderstorm formed nearby and we got a fantastic view of the storm clouds and rain in the distance.   Since there was some lightning, we decided on the better part of valor and headed to the car, only to get inside just as the skies opened up.  It’s funny to me that people run for shelter with their heads covered when it’s raining, but will voluntarily jump into the ocean or a swimming pool.

As I mentioned, if there is lightning, I understand.  I’m headed inside at that point.  However, I admit that if lightning is not present, I like standing outside in the rain on a summer day and just enjoying the cool water coming down out of the sky.  There’s nothing like getting a spontaneous cold shower on a hot, humid day.  Don’t agree with me?  That’s fine, you’re entitled to your opinion. 🙂

Another noteworthy occurrence from my visit to the beach regards the enormous German shepherd that nearly attacked me.  Strange, I always thought it was the sharks I needed to worry about.  As I was headed down the walkway to the water, I passed a girl who was standing there with her dog.  He suddenly lunged at me, barking ferociously, and it was all she could do to hold him back with his leash.  The experience was a bit unnerving, and if I see that girl and her dog again I will be sure to give them a very wide berth as I don’t really have a desire to get eaten. 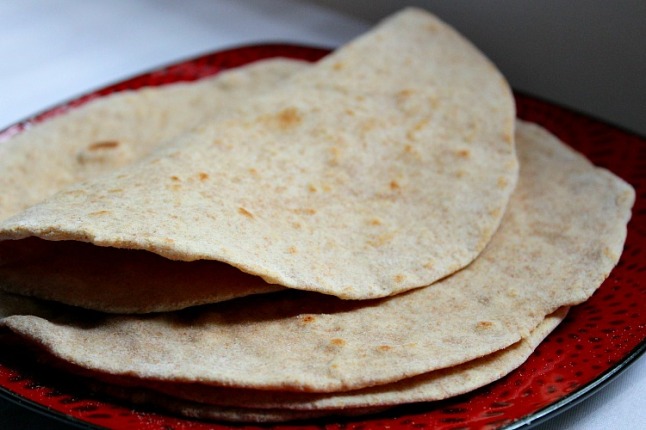 Over the last six months, I have been making an effort to drastically reduce the amount of processed food that we consume.  As part of that, I’ve been making things like sandwich bread, crackers, and tortillas on my own instead of buying them.  I first tried homemade tortillas about five months ago, and Casey and I immediately liked them.

Sometime after that, I bought a package of tortillas from the store during a busy week when I didn’t think I would have to time to make them.  I took a bite and my immediate response was, “Ugh, these don’t taste that great”.  It’s interesting how your preferences change.  We’ve officially ditched the pre-made tortillas now and definitely prefer it that way. 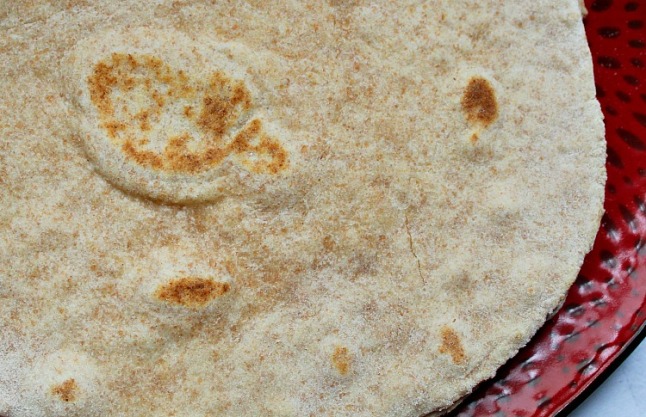 This particular flour tortilla recipe is a combination of several different ideas I’ve read and tried.  I use these with a variety of dishes, including enchiladas, tacos, quesadillas, etc.  (Basically, with any recipe on my website that calls for tortillas, this is what I use.)

Enjoy, and have a great weekend!

Stir together flours, baking powder, and salt in a medium bowl.  Cut in butter with fork or pastry cutter until mixture resembles coarse crumbs.  Gently stir in water until mixture forms dough.  Turn out dough onto a lightly floured surface and knead for 2-3 minutes.  Cover and let rest for 30-40 minutes.

After dough has rested, cut into 10-12 portions and roll each portion out into a thin circle 6-8 inches in width on floured surface.  Place one circle in ungreased skillet over medium-low heat (skillet needs to be preheated).  Cook until top begins to puff up slightly, about 1-2 minutes.  Flip and cook other side for 1-2 minutes.  Remove from heat.

Note:  If tortillas are too crispy or don’t puff up, try adjusting the cooking temperature.  It can take a little bit of practice to get the texture just right.