Reminiscent of a classic PB & J, this smoothie is naturally sweetened with honey and bananas, and contains strawberries and peanut butter for lots of flavor.

I’m finding it hard to believe that August is here already.  Despite the fact that summer usually seems to last until November in Florida, over the past couple of days we’ve gotten a slight reprieve from the heat.  I took advantage of the breezy, partly cloudy weather yesterday to wash, wax, and detail my car.  The vehicle was in desperate need of a thorough cleaning.  Earlier this summer I kept telling myself there was no point in washing it with all the pollen flying around, so I waited until the worst of that was past before giving the car a good scrub.

My productive day got a little interesting after I finished said project.  I opened the driver’s side door to discover that fire ants had somehow managed to get inside of my vehicle.  *insert video clip of Katherine temporarily panicking*  For those of you who may be fortunate enough to live in areas that don’t have fire ants, just know that they are awful and you should never, ever move to a place that has them (got it?).  Thankfully there weren’t very many, so I armed myself with a fly swat and went to work.  If the whole interior of the car had been covered with ants, it would have been time for a trip to the store to get a bug bomb, followed by some major vacuuming.  As it is, I think I’ll just take a fly swat in the car with me the next couple of times that I drive anywhere, in case there are any more ants lurking.  I assure you, their intentions are anything but good.

“I’m sorry, officer, was I swerving?  I was just trying to kill these fire-breathing Florida ants that are large enough to carry off small birds.”  (Just kidding.  I’ll drive safely.)

Today I realized that it’s been a little while since I shared a smoothie recipe.  Casey and I drink smoothies a lot, and I like to come up with new flavor combinations and take notes so I don’t forget the ones we like.  I never used to write down smoothie recipes because I thought, “Meh, it’s a smoothie.  Who needs a recipe for a smoothie?”  However, I discovered that I would often create delicious adaptions and then forget what ingredients I had used.  So I proceeded to start documenting my experiments, and then decided to share the smoothies here in case someone else would like to give them a try. 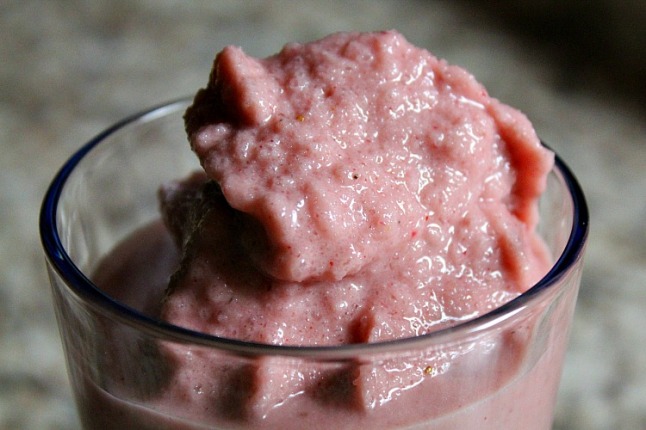 My latest success was this Peanut Butter and Jelly Banana Smoothie, which was given a big thumbs-up by myself and my husband.  As the title states, it has a distinct PB & J flavor even though the smoothie doesn’t actually contain any jelly.  I used strawberries and the sweetness of the banana and honey to create a jelly flavor instead. 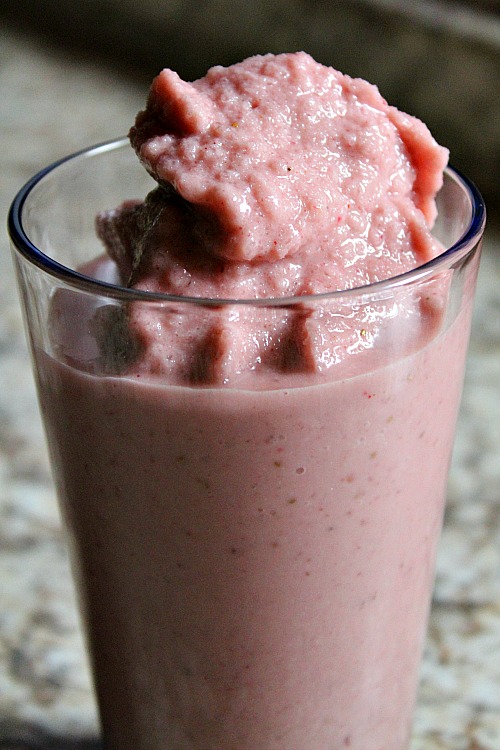 The summer heat is supposedly returning later this week and next week after our very brief reprieve, so I’ll be wanting one of these smoothies again soon!

Add all ingredients to blender and blend until smooth.  Serve.