I’ve debated posting these Mock “Healthy” Chicken Fried Steaks on my blog.  Not because they don’t taste good, but because they look so strange.  I’ve made this recipe a couple of times for dinner recently, and did two photo shoots in an attempt to get an appetizing picture.  As you can see, the results were somewhat debatable and I was concerned that the photos would end up on a “most disgusting food pictures ever” blog somewhere on the internet.  Then I decided that these pictures are about as appetizing as mock chicken fried steak can look, and it’s ok.  🙂

If you’ve never heard of Chicken Fried Steak before, here is a quick history lesson:  The origin of the idea is thought to be from German and Austrian immigrants to Texas in the 1800s.  They possessed a similar recipe called “Wiener Schnitzel”.  Lamesa, Texas is the supposed birthplace of Chicken Fried Steak, and the city celebrates it with an annual festival, which is aptly named, “Chicken Fried Steak Festival”.  The earliest known appearance of a written recipe resembling Chicken Fried Steak was in a cookbook called The Virginia Housewife, by Mrs. Mary Randolph, which was released in 1838.  Multiple other cookbooks containing similar recipes were published by the late 19th century.  (Go here for more info.)

This southern dish is prepared by taking a beefsteak, tenderizing it, dipping it in batter and/or flour and seasonings, and then frying it in hot oil.  One of the spin-offs is something that my family calls “Mock Chicken Fried Steak”.  Instead of using a steak, ground beef is taken and formed into patties, and then floured or coated in cracker crumbs and fried.  The version my mom always made when I was growing up called for saltine cracker crumbs.  I believe she got the recipe from someone my family went to church with years ago. 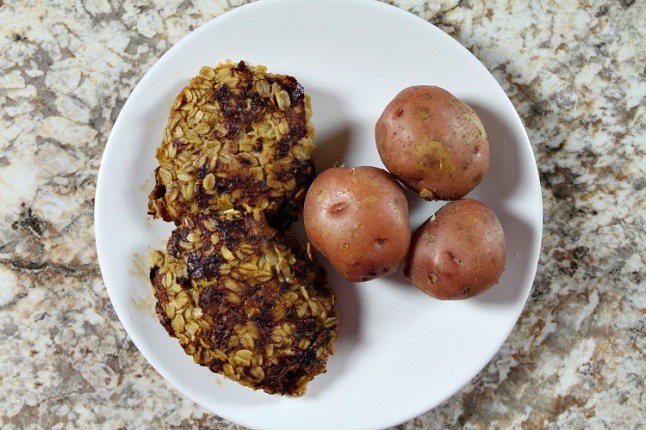 My “healthier” version takes it one step farther by replacing the beef with ground turkey, substituting rolled oats for the cracker crumbs, and using a small amount of olive oil for frying.  Honestly, it’s so far removed from traditional Chicken Fried Steak that I thought about giving it another name, but didn’t know what else to call it.  Mock Turkey Fried Steaks?  Turkey Oat Patties?  I decided I couldn’t justify wasting much time on coming up with a fancy title for this, so I just left it.

I boiled some freshly dug potatoes from my grandpa’s garden to go alongside our “steaks”. 🙂

Combine all ingredients EXCEPT olive oil and 1/3 cup rolled oats in a large bowl.  Use a large spoon or your hands to mix until well combined.  Form into six patties.  Spread remaining 1/3 cup oats in a separate, smaller bowl (or plate) and dip each side of patties into oats, to coat.

Add 1 Tablespoon of olive oil to a 10-inch skillet over medium heat.  Place three patties in skillet and cover to prevent oil splatter.  Cook for 4-5 minutes on one side, flip, and cook 4-5 minutes on the other or until cooked through.  Be careful of oil splatter; don’t burn yourself!  Remove patties from skillet, add remaining 1 Tablespoon of oil to skillet, and repeat cooking process with remaining three patties.

Serve with a side of vegetables!